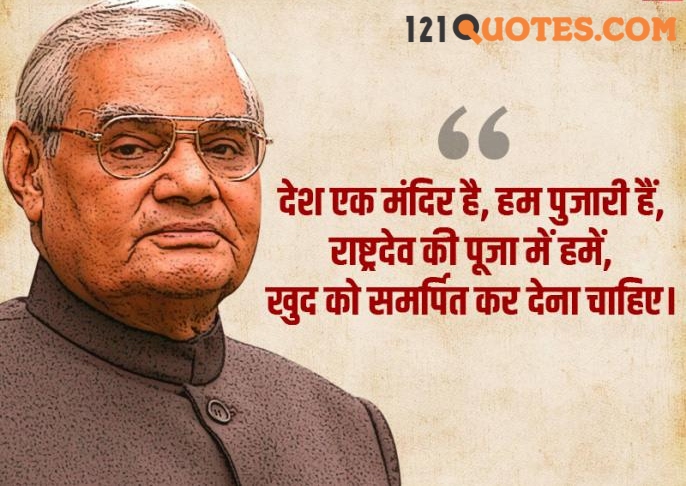 1. “Poverty is multidimensional. It extends beyond money incomes to education, health care, political participation and advancement of one’s own culture and social organisation.”

3. “We hope the world will act in the spirit of enlightened self-interest.”

5. “If you do not like anything in a particular book, then sit and discuss it. Banning a book is not a solution. We have to tackle it ideologically.”

6. “Our nuclear weapons are meant purely as a deterrent against nuclear adventure by an adversary.”

8. “other nations in space exploration and one of them will fulfil her dreams.”

9. “You can change friends but not neighbours.”

11. “Let us together commence a journey of peace, harmony and progress in South Asia.”

13. “I try to indulge my muse whenever I am able to get away from it all.”

14. “My message to the people and rulers of Pakistan is, ‘As neighbours, we want peace and friendship and cooperation with you so that together we can change the face of South Asia.”

15. “My poet’s heart gives me strength to face political problems, particularly those which have a bearing on my conscience.”

16. “India has a legitimate right to becoming a permanent member of the U.N. Security Council.”

17. “The prime minister’s office is not something that one enjoys.”

18. “The BJP is not a party dependent on a single individual, nor is it tied to the apron strings of a family.”

20. “We have given up office, but not our responsibility to serve the nation. We have lost an election, but not our determination.”

21. “If Pakistan had not accepted the demand to stop cross-border infiltration and the United States had not conveyed to us Pakistan’s guarantee to do so, then nothing could have stopped a war.”

22. “This power of democracy is a matter of pride for our country, something which we must always cherish, preserve and further strengthen.”

23. “Whatever understanding is reached with Pakistan has to be followed honestly, and everybody will have to rise above party politics and be actively committed to make India prosperous.”

24. “If Pakistan claims to be a crucial partner in the international coalition against terrorism, how can it continue to use terrorism as an instrument of state policy against India?.”

25. “If the elections are a mere fraud, why are terrorists being trained and infiltrated into India at the command of the Inter-Services Intelligence Agency of Pakistan to kill election candidates and to intimidate voters.”

26. “The regional parties have emerged as a strong force, and they, too, deserve a place in national politics.”

27. “We are unnecessarily wasting our precious resources in wars… if we must wage war, we have to do it on unemployment, disease, poverty, and backwardness.”

28. “I am often accused of colluding with the British during the freedom struggle. I want to ask, how?.”

29. “For the Bharatiya Janata Party, Gandhian socialism is what we want to achieve and make society free of exploitation and full of opportunities.”

30. “India helped Bangladesh to achieve independence. The Bangladeshis should remain happy inside the territory of their own country.”

31. “We used to fight with Pakistan with bombs. Now we are fighting with them on the playing ground.”

32. “It is a matter of concern that science departments in India’s vast university system have suffered greatly due to lack of investments, both material and in terms of faculty.”

33. “Creative universities are bedrock of every developed nation’s S&T strategy.”

34. “In Indonesia, Malaysia, wherever Muslims are living, they don’t want to live in harmony.”

35. “Free and fair elections have again demonstrated that Jammu and Kashmir is part of India, and the people want to remain with it.”

36. “Our frequent initiatives to normalise relations with Pakistan are not a sign of our weakness; rather, they are an indication of our commitment to peace.”

38. “We need to convert the extraordinary goodwill between India and Russia into a thriving, visible, vigorous, and mutually beneficial economic relationship.”

39. “My government is committed to carrying out electoral reforms. It is our firm resolve to keep criminal elements away from power.”

40. “No state should be allowed to profess partnership with the global coalition against terror, while continuing to aid, abet and sponsor terrorism.”

41. “The Bio-diversity Convention has not yielded any tangible benefits to the world’s poor.”

42. “In the euphoria after the Cold War, there was a misplaced notion that the UN could solve every problem anywhere.”

43. “The reality is that international institutions like the UN can only be as effective as its members allow it to be.”

44. “The UN’s unique legitimacy flows from a universal perception that it pursues a larger purpose than the interests of one country or a small group of countries.”

45. “We believe that the United States and the rest of the international community can play a useful role by exerting influence on Pakistan to put a permanent and visible end to cross-border terrorism against India.”

46. “People who ask us when we will hold talks with Pakistan are perhaps not aware that over the last 55 years, every initiative for a dialogue with Pakistan has invariably come from India.”

47. “Who can forget that in critical times of war in 1962, 1965 and 1971, Naga underground organisations did not fire on the Indian Army? They showed restraint.”

48. “It is true that of all the states in India, Nagaland has a unique history. We are sensitive to this historical fact. But this uniqueness has in no way diminished the spirit of patriotism among the Naga people.”

50. “Members of India’s diaspora, living in distant lands of the world, my good wishes to all of you. You may be far away from India, but you are always close to our hearts.”

51. “Our nuclear weapons are meant purely as a deterrent against nuclear adventure by an adversary.”

52. “While accepting donations, no one looks at the colour of money.”

53. “India is a proud and sovereign country. We do not take any decisions under pressure from the U.S. or any other power.”

54. “Poverty is multidimensional. It extends beyond money incomes to education, health care, political participation and advancement of one’s own culture and social organisation.”

55. “The overwhelming public sentiment in India was that no meaningful dialogue can be held with Pakistan until it abandons the use of terrorism as an instrument of its foreign policy.”

56. “We should always care for the minorities and be attentive towards their welfare.”

58. “Indian democracy’s greatest strength is that we have always put the nation above politics.”

59. “Though I stay in Delhi, I often think about Himachal.”

60. “It requires an effort of logical acrobatics to believe that carnage of innocents is an instrument for freedom and elections are a symbol of deception and repression!.”

61. “Ours is a multi-religious country, a multi-lingual country; we have many different modes of worship. We believe in peaceful and harmonious co-existence.”

62. “Victory and defeat are a part of life, which are to be viewed with equanimity.”

63. “Empowering the individual means empowering the nation. And empowerment is best served through rapid economic growth with rapid social change.”

65. “Our aim may be as high as the endless sky, but we should have a resolve in our minds to walk ahead, hand-in-hand, for victory will be ours.”

67. “I dream of an India that is prosperous, strong and caring. An India, that regains a place of honour in the comity of great nations.”

69. “Our words, actions, and diplomatic efforts should be aimed at trying to achieve pragmatic goals rather than creating rhetorical effect.”

70. “India and the United States have taken a decisive step, away from the past. The dawn of the new century has marked a new beginning in our relations. Let us work to fulfil this promise and the hope of today. Let us remove the shadow of agitation that lies between us and our joint vision.”

71. “Our nuclear scientists and engineers have done a splendid job, and naturally, the entire nation has risen to salute their professional excellence, discipline, and patriotism. They have had the benefit of having been led in the past by great men like Homi Bhabha and Vikram Sarabhai.”

72. “Our objective should be to firmly deal with terrorism and its sponsors, financiers, and arms suppliers. At the same time, our doors should always be open for processes which would restore peace, development, and progress to societies which have been devastated by terrorism over many generations.”

73. “As we talk with candour, we open the doors to new possibilities and new areas of cooperation in advance in democracy, in combating terrorism, in energy and environment, science and technology and international peacekeeping.”

74. “I believe India and Israel should focus on building bilateral relations on the basis of shared perspectives and commonalities between our two democracies. This has to be a forward-looking exercise rather than harking back to perceptions of the past.”

75. “During the 1942 Quit India Movement, I was a student at Gwalior High School. I was arrested by the British for participating in the movement. My parents then sent me off to my village where, again, I jumped into the movement.”

76. “India has a consistent and well-known position on terrorism. We oppose all acts of terrorism, wherever they occur. We have repeatedly said that no cause can justify violence and destruction, particularly aimed at civilians.”

77. “India was secular even when Muslims hadn’t come here and Christians hadn’t set foot on this soil. It is not as if India became secular after they came. They came with their own modes of worship, and they, too, were given a place of honor and respect. They had the freedom to worship God as per their wish and inclination.”

78. “I would like that no citizen of the state feels alone and helpless. The entire nation is with them.”

79. “We hope the world will act in the spirit of enlightened self-interest.”

80. “Violence does not contribute to anything.”

81. “I believe the gun is no solution to problems.”

82. “There was an implicit conviction that the UN would be stronger than the sum of its constituent member-states.”

84. “If Advaniji did not want, I would never have been Prime Minister.”

86. “I believe that democracy is the best guarantor for peace and cooperation among nations.”

87. “I have a vision for this country; An India that is free from hunger, fear, illiteracy and deprivation.”

88. “My poem is a declaration of war, not a prelude to defeat. My poem is not the despair of a defeated soldier, it is the resolve of a struggling warrior. It is not a voice of despair, it is a cry of confidence.”

89. “Hunger is not a law of God, but it is the result of failure of human systems.”

90. ” Love of homeland, philosophy of life, nature and sweet feelings have been influencing me since childhood.”

91. “Our nuclear arsenal is sufficient to discourage purely nuclear attack by the adversaries.”

92. “If you don’t like anything in a particular book, sit down and discuss it. Banning a book is not a solution. We have to deal with it ideologically.”

93. “Victory and defeat are an important part of life, which should be seen with equality.”

94. “The hard work done for the goal never brings fatigue on you, it only brings satisfaction to you.”

95. ” The success of family welfare depends on giving complete freedom to women with their lives.”

96. “Service-work cannot be expected from the government, for that only social-service organizations will have to come forward.”

97. “I have not come here with promises, but with intentions.”

99. “I am not afraid of dying, but I am afraid of being slandered.”

100. “If there is a stir in any country, then understand that the king there is honest.”

101. “Democracy is a very delicate plant. Democracy has to develop gradually. The Center has to move forward in the spirit of taking everyone along.”

ABOUT US
Welcome to 121quotes, a site created for anyone looking to improve themselves and expand their boundaries – and who is willing to put in the work to make it happen!
Contact us: [email protected]
© All Rights Reserved © 2021
MORE STORIES